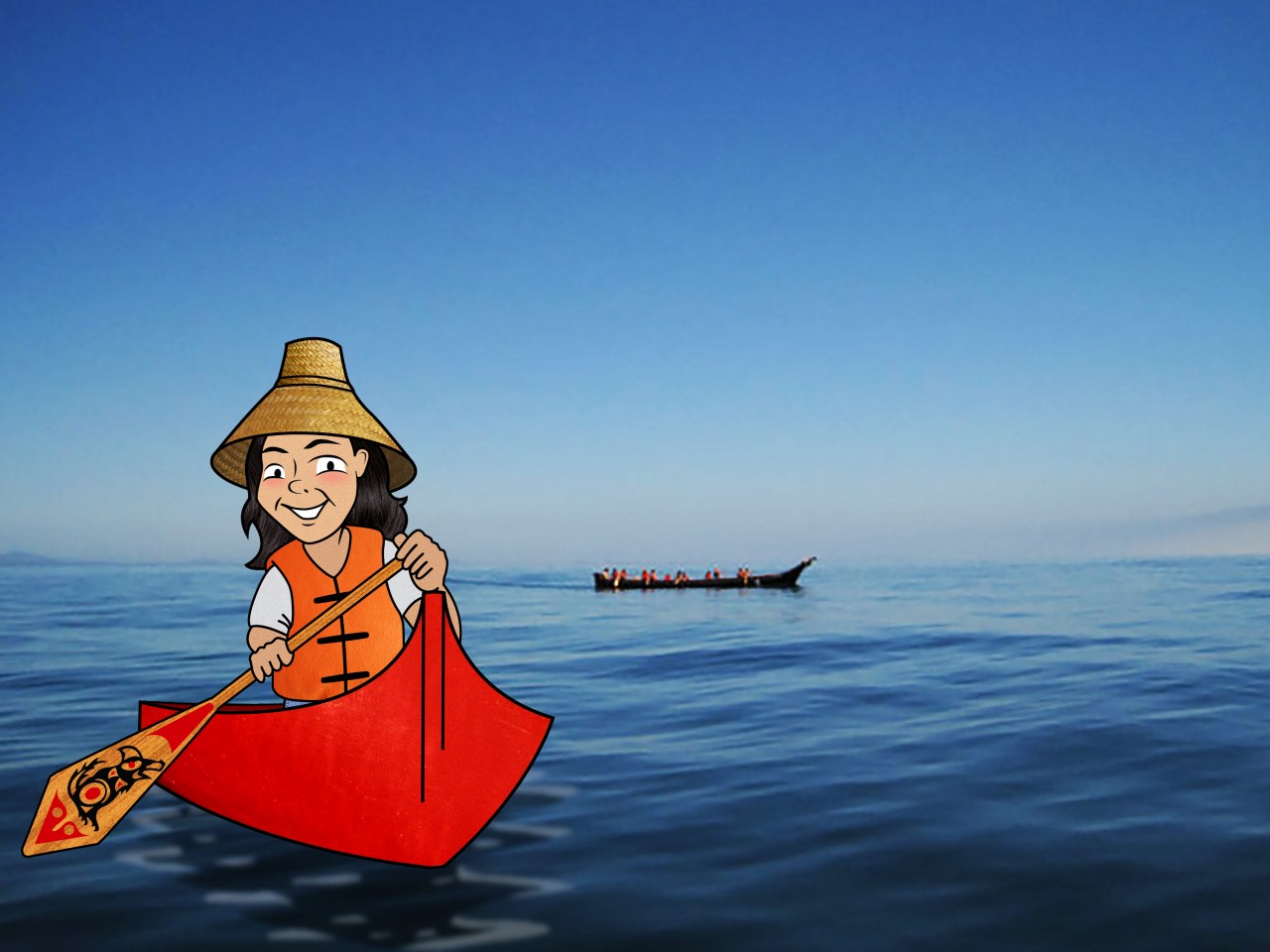 T'Sou-ke is a canoe family.  A canoe family is several families from our community that are united as a group, bonded by pulling one of our canoes together on a journey to various locations.  The term "canoe family" is still used today as a phrase signifying that we paddle together.  Canoe paddling, drumming, dancing, singing, weaving, harvesting seafood, growing traditional foods, travelling and carving are some of the activities that sustain us as a nation.  Our language and culture is the core of our identity.  When we paddle to other villages we share our language and culture through our songs, protocols, stories and teachings.

As part of a canoe family and spending so much time on the ocean paddling, I have learned the importance of preparing ourselves in every way, spiritually, physically and mentally as individuals and as a group.  How we prepare before leaving home, how we come together as a group on a canoe journey, and the safety and spiritual teachings we apply, is what makes the trip a success.  Below is a video clip from our Canoe Journeys and the grand landing at the opening of the 2008 Indigenous games.  This video was played in the BC Pavilion during the 2010 Olympics in Vancouver, BC, Canada.

​Below is a video of my cousin, Chief Gordon Planes, talking about the cultural meaning behind the canoe 'the Siaosun Warrior' that he carved himself.

Gord Planes introduces us to the Siaosun Warrior. Hand hewn by Gord from a single cedar log. The canoe is named for the village of Siaosun where it was desig...
https://www.youtube.com/watch?v=8BzCe6n9A54

Here is some information about the history of Tribal Canoe Journeys:

"Tribal Canoe Journeys is a celebrated event for the Indigenous peoples of the Pacific Northwest Coast.  Nations from the coast of Alaska, British Columbia, and Washington state participate every year in these Tribal Canoe Journeys.  These are a sequence of canoe journeys taken up by canoe families, nations, and groups who travel in ocean-going canoes, either authentic replicas of traditional canoes, made out of solid cedar logs or various replicas using more modern techniques and materials" (Paddle to Quinault Canoe Journey Staff. "Paddle to Quinault 2013").

"The Tribal Canoe Journey is a revival of the traditional method of transportation and is a significant cultural experience for all the participants. The canoe culture had all but disappeared until 1989 when the "Paddle to Seattle" was initiated during the 100th anniversary of Washington Statehood.  That year, the state and local tribal governments signed the Centennial Accord recognizing tribal sovereignty" (Olympic Peninsula Intertribal Cultural Advisory Committee (2002).

"In celebration, coastal tribes organized the Paddle to Seattle to help revive their canoe culture.  Fifteen tribes participated the first year.  The journey started in La Push, home of the Quileute tribe, and included stops at traditional village sites along the way.  Each year, a different nation hosts other Indigenous nations coming from coastal communities of Alaska, British Columbia and Washington.  Depending on distance, the trip can take up to a month.  Participants learn traditional canoe carving and decorating, and learn to work together as a "canoe family".  On arrival, the host tribe holds a Welcoming ceremony, with the canoe families asking permission to land. Cultural festivities, such as drumming and dancing, last for days. In 2009, the Suquamish tribe hosted the 20th anniversary in their new House of Awakened Culture with over 6,000 participants and 84 canoes coming ashore.  The 2011 Tribal Journeys event is hosted by the Swinomish Indian Tribal Community the Swinomish Territory near Anacortes, WA" (retrieved from: http://www.swinomish-nsn.gov/Resources/Canoe-Journey-2011).

Below are pictures of my family and I from different years participating in Tribal Canoe Journeys. 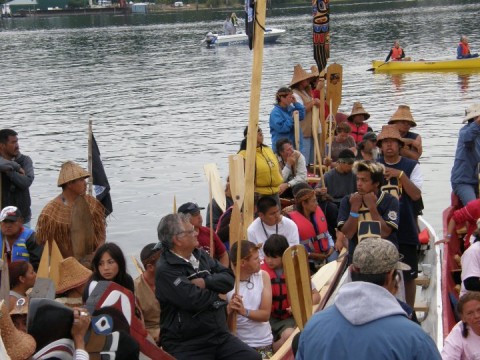 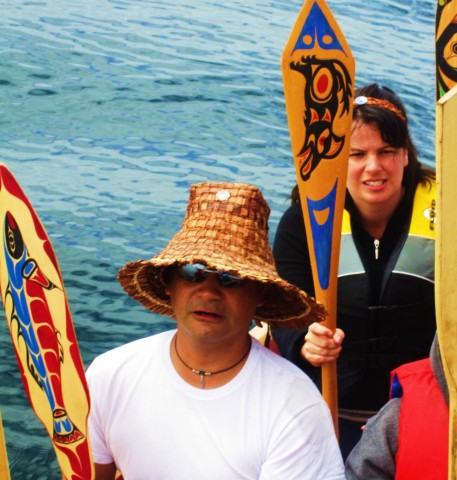 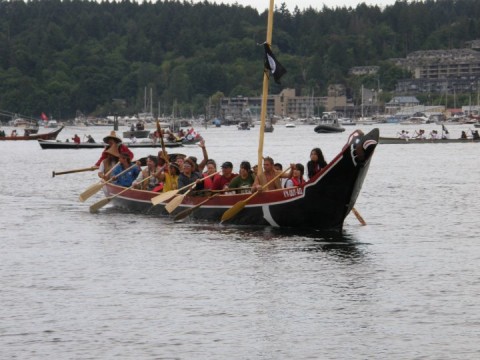 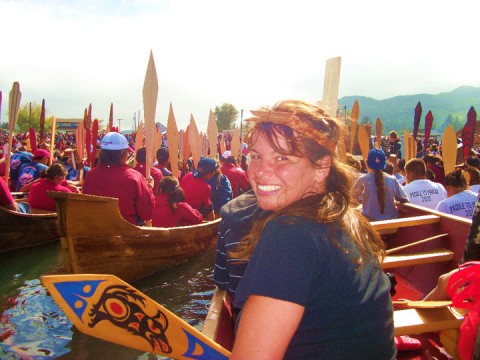 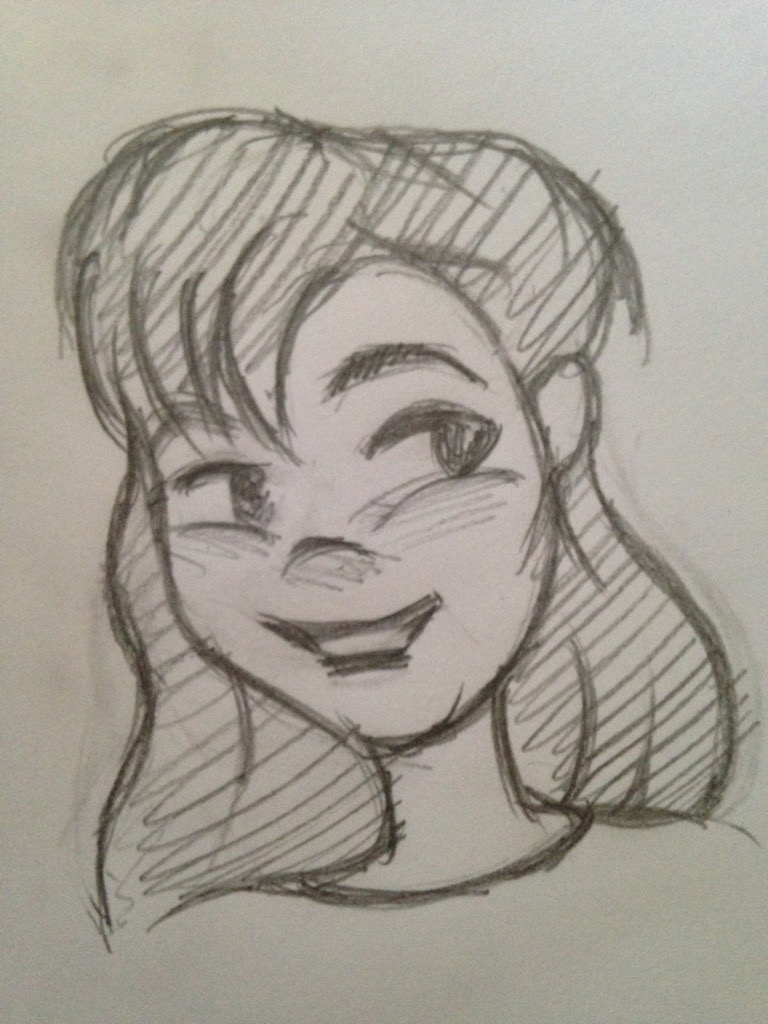 Trena is a Coast Salish girl from T'Sou-ke Nation. She loves to paddle, drum, dance, enjoy seafood and go on adventures. Come have fun with Trena while she shares her cultural teachings and learns the T'Sou-ke language.